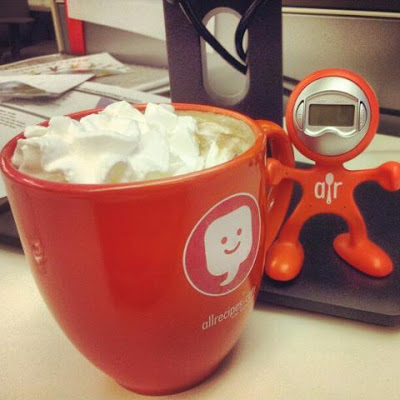 You pass the donuts and head out to the coffee station at work.  Brew a fresh pot of coffee.  While the coffee is brewing, you pull out a packet of hot cocoa mix and empty it into a bag.  In go the two packets of creamer, and you mix, waiting for the coffee to finish brewing.

Hot, steaming, coffee goes into the cup.  You mix.  And then, to make your morning just a little bit better, you reach for the whipped cream, in a canister, and give the drink its finishing touch.

No offense, but when it comes to coffee, I prefer to stay away from the mega blockbusters of coffee shops (yes, I’m talking about you, Starbucks).  On a recent visit to Capitol Hill, I met with my friend Priya at Arabica Lounge for a cup of coffee and something sweet.

The place was buzzing with the smell of freshly ground coffee beans, and cherry blossoms stuck in glass jars adorned beyond-gorgeous wood tables.  I wanted to pull out my laptop, or grab a book and settle in for an hour or two.  Short on time, I waited on Priya to arrive, ordered a “cup” of coffee and a chocolate cookie.  A word of advice ~ if you are serving a naturally gluten free item, like this delicious flourless chocolate cookie, perhaps you should call it a Flourless Chocolate Cookie instead of Gluten Free Chocolate Cookie.  Thoughts?

The experience at Arabica Lounge left me amused and caffeinated.  Let’s discuss the amusing parts first.  My coffee was served in a glass jar, rather than a cup.  I suppose that gives it a more rustic, down-to-earth feeling, but I would have preferred a cup with a handle and a thinner rim to sip the coffee.

Instead of a register to take the payment, the Lounge used an automated, touch-screen computer for credit cards.  Everything was touch-screen and automated.  I had to ask for the receipt to be printed.  Adding a tip was almost forced, since your server waited for you to add it in before printing the receipt.

I loved the community table at the center of the cafe.  While sitting at the table with Priya, the gentleman across from us, seemingly of European decent, struck up a conversation with us and suggested a few cocktail lounges/bars to visit in the area.  Priya – we still need to go!

The array of baked goods in the display case was quite appetizing.  I decided to go for a Gluten Free Chocolate Cookie, which I think should be renamed to a Flourless Chocolate Cookie.  The cookie was thin, dense, and chocolaty rich.  It reminded me of the cookies sold at the Apple Pie Bakery at the Culinary Institute of America.  The top was lightly crackled.  I could’ve had eaten another one, but shared the one I had with Priya, instead. 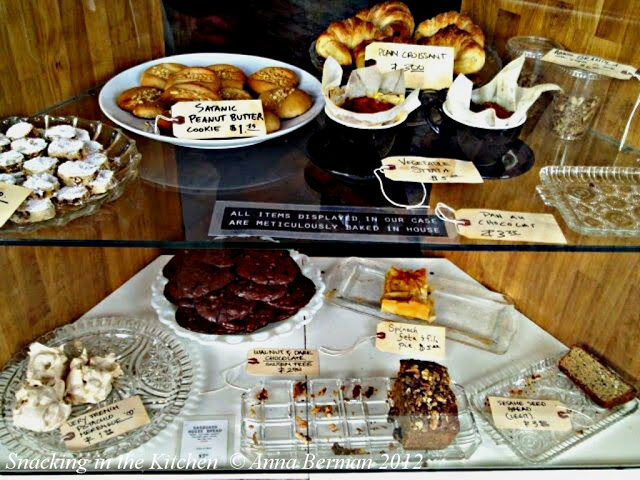 Next time you are in the area, skip the overpopulated, big-name corporate coffee shops, and stop at Arabica Lounge instead.
Location:

We left the turkey, cranberry sauce, and stuffing behind, packed our bags and headed out to Portland for a post-Thanksgiving weekend away.

Magically, after days of never-ending pouring rain in Seattle, the sky cleared up, the sun made its much appreciated appearance, and the traffic cooperated nicely.

On the way to Portland, we made a stop in Olympia, Washington to pay our respects to the Washington state capital and walk around.  Not wanting to leave right away, we drove to the downtown area and missed it.  That’s right – the downtown is literally just a few blocks in length.

Looking for fuel in the form of caffeine, we stopped at Bonjour Cupcakes bakery.  The bakery had an old charming feel and decor, with scattered cupcake-related merchandise.

We chose two mini cupcakes: red velvet and chocolate mocha, adorned with a chocolate covered coffee bean. While I can’t vouch for the red velvet cupcake (someone is still learning how to share), the chocolate mocha cupcake was a perfect two-bite delight.

Our first meal in Portland was just a few blocks from the hotel (we stayed at the fancy Historic Governor Hotel – thank you http://www.priceline.com).  Kenny and Zuke’s Delicatessen serves up pastrami sandwiches, lots of local beer, and plenty of pickles.  Unfortunately, they were out of latkes for the night, and the gefilte fish has yet to make its appearance on the menu, but the place was bustling with happy customers and we were ready to order. 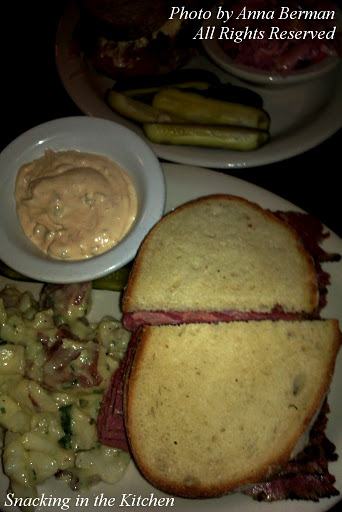 Pardon for the quality of the photo. The photos in this post were taken with my new phone and could use some work.  Back to the food.  The chicken liver sandwich with pastrami was my favorite.  I honestly would’ve loved it without the pastrami, and will order it plain if I return to the deli.  The pickles were crunchy, and as addicting as ever.  I did like the potato salad and coleslaw, but my body was craving something hot and slightly more nurturing – perhaps a bowl of matzo ball soup would’ve done the trick.

Following the meal, we walked around the downtown area of Portland, taking in the holiday lights and the ever-present determined Black Friday shoppers.  I won’t lie – there was a mandatory stop to the Macy’s shoe department, but somehow I ended up purchasing zilch and taking no advantage of tax-free shopping the entire weekend.

On the way back to the hotel we stumbled across Voodoo Doughnut shop. Along with the glaring neon sign and the long line of patrons that extended outside, the sweet smell of doughnuts beckoned us to come in.  We settled on a Mango Tango (raised yeast doughnut, filled with mango jelly and topped with vanilla frosting and tang!) and Raspberry Romeo’s (raised yeast doughnut, filled with raspberry jelly and glazed on the outside).

I did enjoy the unusual flavors of Mango Tango and the tanginess that mango added to the doughnut.  I dedicated the doughnut to my sister of MangoTomato and my good friend, and tango extraordinaire Lera.  Unfortunately, Raspberry Romeo’s didn’t fare as well and ended up composed, hardly eaten.

The next day’s adventure started at Fuller’s Coffee Shop.  This traditional, cash only, diner served up heaping plates of eggs, crispy potatoes, and bacon.

I went for a Mexican-style breakfast of potatoes, smothered with tomatoes, mushrooms (clearly canned, not fresh), spinach, salsa, cheese, and sour cream.  My partner, once again, chose a more delicious option of spinach and sausage scramble with crisp potatoes on the side.  We finished with country white toast smothered with homemade raspberry jam and headed for a 3-hour adventure at the Portland’s Museum of Art – or was it the Portland Art Museum?


The day’s culinary adventures ended at Hollywood Bowling with the mandatory White Russian and a plate of nachos.


The next morning, with the return of rain (I think the city was mourning our departure), we sipped on a cappuccino and a mocha at Portland’s Pearl Bakery cafe.

I got into a heated debate over heating up my chocolate croissant, but the service was refused, and I missed out on warm chocolate, oozing between the thin layers of flaky puffed pastry.


Our adventures of eating ended at a nondescript, perfectly delicious, family-run pho shop with heaping bowls of steaming broth, rice noodles and a few meatballs.  We bid farewell to Portland and headed back to Seattle.


And before I tell you all good bye, here is something we did not eat (found in Olympia, the Washington state capital). 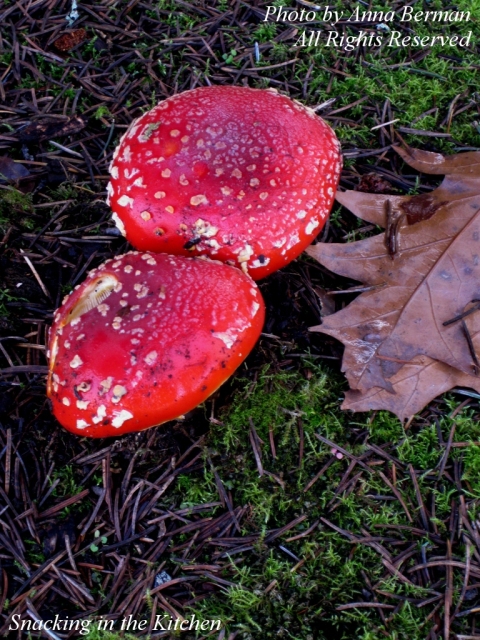 Like Loading...
I’ve been thinking about breakfast a lot lately.  I just recently wrote about my idea for savory cottage cheese with vegetables and poached eggs in green olive caponata.  And today, I’m thinking carbs!  I might be thinking, craving, and dreaming about carbs especially since this is the first year I am trying to observe Passover rules.  Not as easy as I thought.  So as I’m sitting here, thinking about bread, I thought I would share with you the quintessential breakfast I had just a few weeks ago in New York at Pick-a-Bagel. 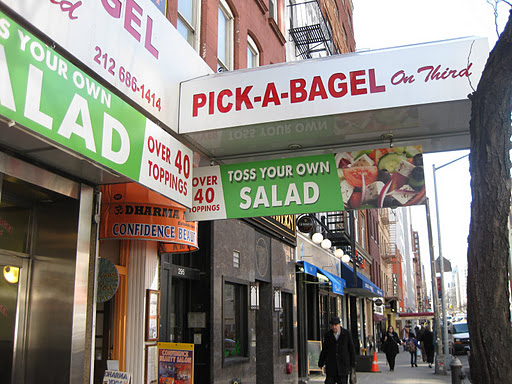 One might be overwhelmed by the options – the variety of bagels and flavored cream cheese looked endless.

What a girl to do?  My sister and I decided to share.  We opted for a larger in diameter, but thinner version of  the bagel with a very generous schmear of White Fish spread and sliced tomatoes.  Add a side of sour and half sour pickles, a cup of coffee, and breakfast is served! 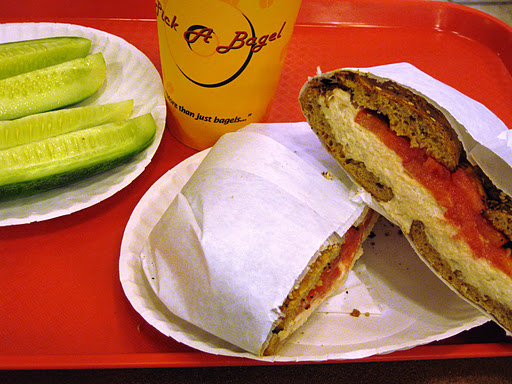 Do you like your bagels toasted or not?  I’m a big fan of a toasted version and these New York bagels were perfect!  Lovely and crisp on the outside, they had a perfect barrier against the white fish spread – no soggy bagels here! 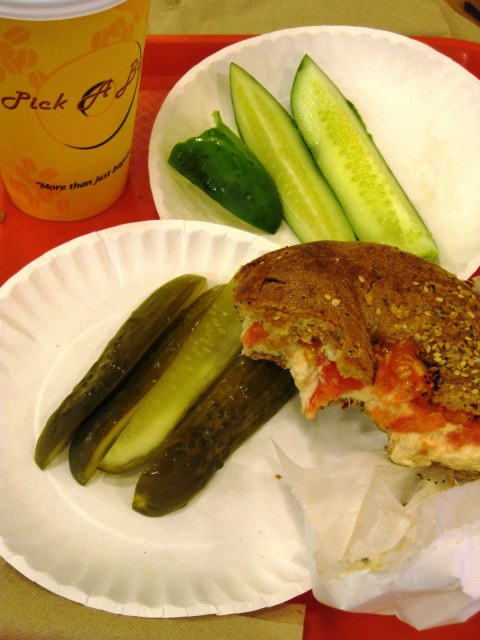 If you are lucky to live in New York city, stop by and pick up a bagel.  I would love to hear from you what’s your favorite combination is.
Back to the blog

…how a Jewish Food Fair turns into a casual lunch at Pho Que Huong.

Last Sunday, I had every intention to enjoy knishes and matzo ball soup at a Jewish Food Fair held at a local Temple Emanu-El. But something happened as I entered into a crowded hall, lined with tables that held egg-brushed challah bread, sliced brisket, pastrami sandwiches and freshly baked sweets. I walked around, through the crowd of hungry individuals, and decided that I was craving something else – plus there wasn’t a knish to be seen. And so, I turned and left the synagogue.

Where to for lunch? It was a beautiful sunny and warm Sunday afternoon, and I thought it’d be a perfect chance to go for a drive to a restaurant that I have been wanting to try for a few weeks. Why Pho Que Huong? Simple – after two months in Birmingham, I was craving something other than grits, bbq, and biscuits. And a light, flavorful, and inexpensive Vietnamese cuisine would do a trick, or so I hoped.

The menu was pretty standard – a wide selection of pho, noodle soups, noodle bowls, and traditional Vietnamese sandwiches made with french baguettes and sliced pork. Since this was my first time at the restaurant, I decided to go the traditional route – spring rolls, pho, and a Vietnamese iced coffee. 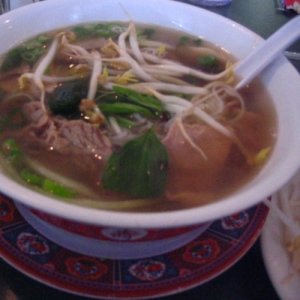 The spring roll – an upsetting disappointment – it had me seriously worried that the rest of the meal would only get worse. The rice paper was thick and chewy, not transparent and light like it needs to be. And the filling wasn’t much better. It seemed that instead of flavorful pork or shrimp and crisp vegetables, this spring roll was filled with noodles and lettuce. The dipping sauce helped slightly, but not enough to save this roll. Word of advice – skip the spring roll on your visit!

And then the pho arrived. Accessorized with fresh basil, lime wedges, and sprouts, the bowl of pho was sweetly perfumed. The key to good pho, in my opinion, is a clear, flavorful broth that is perfectly balanced with the addition of freshly squeezed lime, torn basil leaves and a touch of hot chili sauce. The slices of flank steak and rice noodles are a nice addition – the steak in my bowl was perfectly tender and lean, the noodles twirled just right around the chopsticks. The verdict – one good bowl of pho!

The ending to the meal? A healthy doze of caffeine – a traditional iced Vietnamese Coffee. The set up – a glass of ice, a shorter glass with condensed sweet milk on the bottom and a dripping coffee on top. You have to patiently wait until the coffee has finished dripping, then stir the coffee with the condensed milk and pour over a glass of ice. The end result? Perfection.

I will happily return to Pho Que Huong and hope you will too.