When I was a student at The Culinary Institute of America, one of my favorite meals at the school was the Braised Korean-Style Short Ribs by Chef Michael Garnero.  I’ve had the dish several times at the St. Andrew’s Cafe and to this day remember the tender beef, flavored with rich flavors of brown sugar, soy, and rice vinegar.  It has been two years since I graduated from the school and here is my attempt to recreate the dish.  It’s comforting, delicious, and a true labor of love. 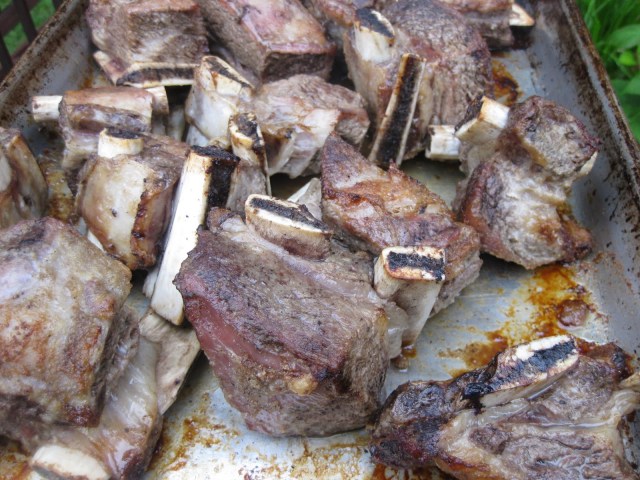 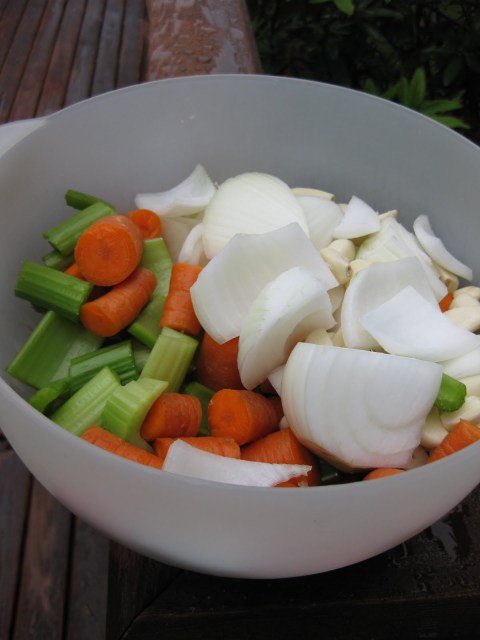 I’m not sure what happened, but something must’ve been lost in the translation.  The brain was saying “grilled cheese” but the body must’ve been craving something else.  And that’s how this dinner came around.  I was thinking, something quick, easy and satisfying would be in order for this late dinner for two.  What could be easier than grilled cheese?

“Do you have bread?” I asked my dining companion?  “Yes“
“What about cheese?” I continued, with a slight a smirk.  This might as well have been a rhetorical question.     Yes, there was plenty of cheese.  So with that in mind, the basics of the grilled cheese sandwich were pulled out of the refrigerator.  So what happened next?

Next, came out an onion, garlic, Anaheim pepper, a boiled potato and a few slices of bacon.  And the grilled cheese sandwich as you know it disappeared from the dinner menu.

Instead, I made Bread Boat Potato Hash Melts (or something like that). 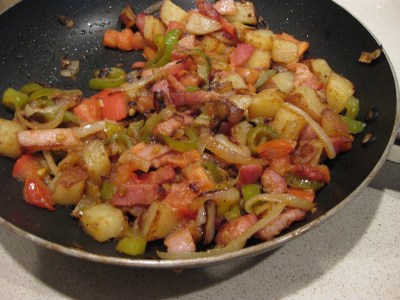 Directions:
1. Heat olive oil in a skillet over medium-high heat.  Add onion and pepper; saute for 5 minutes (Try not to set up a smoke alarm).
2. Add bacon and garlic, continue to saute until onion and pepper are translucent and the bacon begins to crisp up.
3. Add the potato and season with salt, pepper, and red pepper flakes.  Cook until everything is heated through.  Taste and adjust the seasoning.
4. Preheat a toaster oven to 375 degrees.
5. Brush the inside and outside of the bread with olive oil.  Season with salt and pepper. Bake in the oven for about 10 minutes or until crispy. 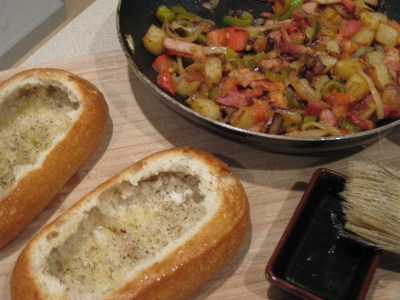 6. Remove the bread from the oven, and fill with the potato filling.  Cover with cheese and return to the oven. Bake until the cheese has melted.  You can choose to use the broiler if you wish – be sure to watch closely. 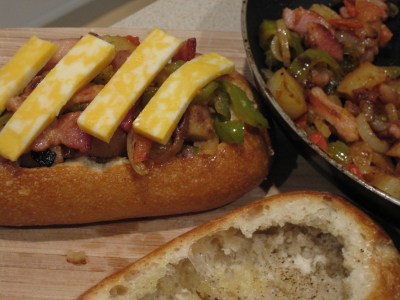 7. Remove from the oven and cool slightly before eating.  Serve with a bottle of red wine. 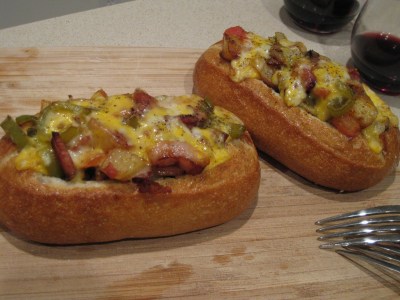 Note: the forks were photographed purely for a visual.  None were used while consuming the cheese boats.  This would make for a perfect breakfast.

“What kind of food do you like to cook?” is the question I get asked too many times.  The answer is usually simple enough: “Fusion.”

That’s right, I like fusion food.  Having been lucky to live in 2 countries and in many states and cities, and with many international trips, I have discovered numerous ingredients and flavors.  Borders?  Not in my food!

So here goes an example of my fusion cuisine – The Everything-Fusion Chicken Salad. 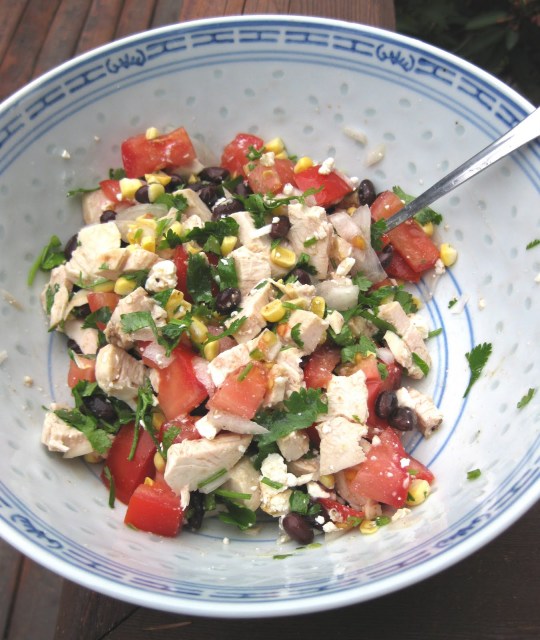 Mix all, taste for seasoning and enjoy.

I grew up in a Jewish family that didn’t keep kosher.  Russian shashlik (marinated pork cubes, skewered with onions and roasted over fire), cured pork belly and bologna were all regular guests at our dining table.  I’m a fan of pork.  Never had I imagined though that I’d consume so much pork at one time that my Jew membership might be at risk.  Enter Foodbuzz and Cochon 555.

It was just another day at work, when an email from Foodbuzz popped into my inbox with a very enticing subject line: Win Tickets to Cochon 555.  No catch, you just had to be the first one to respond.  And so I did, hoping and praying and visualizing lots of pork goodness in my future.  I have to say, I hardly ever win anything, so imagine my surprise, shock, and amazement when I got an email back saying that I was the lucky winner!  The countdown to pork began.

The line up for Cochon 555 in Seattle presented 5 Chefs:
John Sundstrom from Lark
Adam Stevenson from Earth & Ocean
Anthony Hubbard from Chow Foods
Chester Gerl from Matt’s in the Market
Tamara Murphy from Brasa Restaurant

and 5 Wineries:
McCrea Cellars
Long Shadows Wineries
Buty Winery
Fidelitas Wines
Elk Cove Vineyards
Glass and camera in hand, with my friend Lorelei on my side, I entered the pork heaven aka Bell Harbor International Conference Center.  The smell of pork and wine permeated the room, the crowd buzzed with excitement and my stomach called for action.
We stopped by a beautiful cheese & bread display courtesy of Marcina Bakery.  A little cheese, a little bread, a sip of red wine and it was on to the pork.

Our first stop was Anthony Hubbard from Chow Foods who also happens to be the last year’s winner. 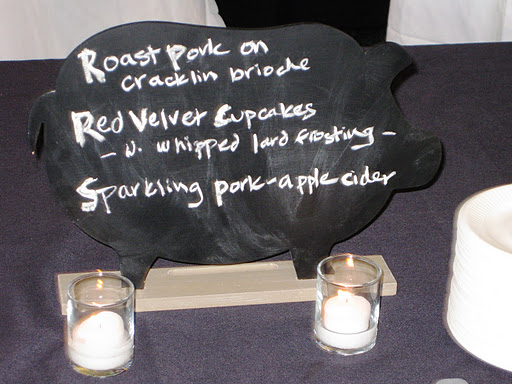 Sparkling Pork-Apple Cider?  Yes, you read it correctly.  The pork is no longer just for roasts, tacos, and BBQ.  The chefs took the liberty of using pork in desserts (can you say bacon and apple ice cream?)
Lorelei leisurely walked from one station to the next, refilling our glasses, and stopping to say hello to some friends.  There were some delicious and inspiring bites but my favorite came from Chester Gerl of Matt’s in the Market.

On the plate (I’m hoping I’m doing the food justice):
Tomatillo posole with pork (duh!), radishes, cilantro, and popcorn that has been popped in pork fat (well, but of course!)
Roasted pulled pork in a spicy tomato sauce
Mole ice cream on a chicharrones (lightly sprinkled with cinnamon) – rich, smooth, and crunchy all in one, it was a winner!  (in my eyes at least, unfortunately Matt’s in the Market did not win).
A few more delicious bites:

John Sundstrom from Lark does a pork “slider” and also bacon & apple ice cream (not pictured).

Another version of posole by Tamara Murphy from Brasa Restaurant.  And the everything-pickled addict in me loved the pickled watermelon rind.  Also not pictured is the pimento ice cream sandwiches.
Here’s for the sad truth.  By the time Lorelei and I reached John Sundstrom from Lark, the food was gone!  (there must’ve been a lot of very hungry people!)  And guess who was crowned the champion of the pork battle?  That’s right – John Sundstrom!  Guess it means that a trip to Lark is in the future.
So big thank you to Foodbuzz and Cochon 555 for a wonderful, filling wine & dine experience.